Hi, I'm Georgia! One of the Happy Beds content writers.

When I'm not here you can find me sipping a strong coffee, desperately trying to finish my novel whilst attempting to train my two naughty house bunnies!

We waited six years for a Frozen sequel, and Disney finally delivered! And the best part, it delivers on being a worthy and enjoyable sequel. I went to see this film, opening weekend on a Sunday evening and the cinema was packed with adults and children galore, laughing crying and generally enjoying the magic of Frozen 2!

I’m sure your kids will be dragging you to the cinema any day now to find out what happens to Disney’s favourite sisters, or maybe you’re a die-hard Disney fan and want to find out for yourself, either way, you really are guaranteed to enjoy Frozen 2.

There may be spoilers in this article!

So, what happens in Frozen 2?

Frozen 2 provides us with laughs, brilliant songs and finally a complete storyline. It doesn’t feel like a cheap imitation of its original storyline, as so many sequels do. The film follows Elsa, who is called and led by a “secret siren” through the Enchanted Forest to River Ahtohallan to learn truths of the past. Anna follows, with Olaf, Kristoff and Sven. Anna’s worry for her sister in this film is different, it’s weaved into the plot, but it isn’t the main obstacle here as it was in the first film.

The film begins with a flashback, a classic trope in a sequel, it tells us that though this film may be a sequel, it’s also a kind of origin story. In the flashback, we see a little Elsa and Anna with their parents again. They’re told a story of an enchanted forest that lies to the north, ruled by the four spirits, earth, air, fire and water that was sealed off by a magical fog following a battle between Arendelle and the Northuldra, indigenous people of the forest.

Elsa and Anna’s mother, Queen Iduna, is a much bigger character in Frozen 2, she sings them a lullaby about River Ahtohallan, “All is Found”. She sings, “There's a river full of memory...For in this river all is found”.  This nicely foreshadows what happens in the rest of the film - Elsa has to go to river Ahtohallan to find out the truth of the past, and on the way, she finds herself.

What about the songs?

We never thought we would find a song as epic, or as often played as “Let It Go”, but I think that Frozen has two solid contenders.

“Into The Unknown” is truly stunning, Idina Menzel’s voice is unbelievable, and the song builds in such a beautiful way. Beginning with Elsa’s refusal to acknowledge the secret siren’s call and ending with her asking “How do I follow you, into the unknown?”. This has really been Elsa’s story since the beginning of the Frozen films, she never fully embraces her powers and follows them. This siren call is literally a higher calling, telling Elsa that her powers are meant for something more.

The second contender is “Show Yourself”, again Idina Menzel’s voice shines, having a broadway star like her in the forefront of this movie is one of the things that makes these songs so powerful. In this, Elsa is sure she is being led to Ahtohallan to meet someone who can give her answers, not only about the past but about her powers. But it turns out the thing she has been looking for all along, is herself. This song is my personal favourite in the film, the whole sequence is just stunning to watch, and it calls back to many of our favourite Frozen moments.

The other songs include a rock ballad from Kristoff, “Lost In The Woods”, personally, it wasn’t my favourite, Jonathon Groff has such an amazing voice, and it seemed a little bit wasted with this song. Olaf also gets an “In Summer” style song again, called “When I Am Older” which has an interesting premise, which we will chat about next.

As I said earlier, we waited 6 years for Frozen 2 to come out in cinemas, though the film is only set 3 years post the events of the first film, making Elsa 21 years old. The film acknowledges that not only have the characters grown up, but the audience that made up the original Frozen fans have too. This is acknowledged in a brilliantly literal way in the second song in the film, “Some Things Never Change”. Olaf literally breaks the fourth wall and sings “You all look a little bit older” directly to the audience.

Another brilliant example of this is Elsa whilst singing “Show Yourself”, a memory of her singing “Let It Go” appears, and Elsa visibly cringes, as we all do when looking back at our 18-year-old selves actions!

Not only is the film darker and quite frightening for a U rated film, but it’s also much more “grown-up” in its issues and themes. There’s no one villain that the team need to defeat like Hans in the first film, rather a truth to uncover and a wrong to make right. It’s a story about finding yourself and knowing where you belong and where you excel. That partnered with the sister relationship we all love, makes this film something really special.

Don’t worry though, the film is still a fun family watch - Olaf provides the much needed comic relief that we all love, the cinema filled with giggles each time he cracked a joke and you and your child are guaranteed to crack up too.

This definitely isn’t the fun-filled Frozen that we know, but that doesn’t mean it will be any less loved.

Do You Have Frozen Fever?! 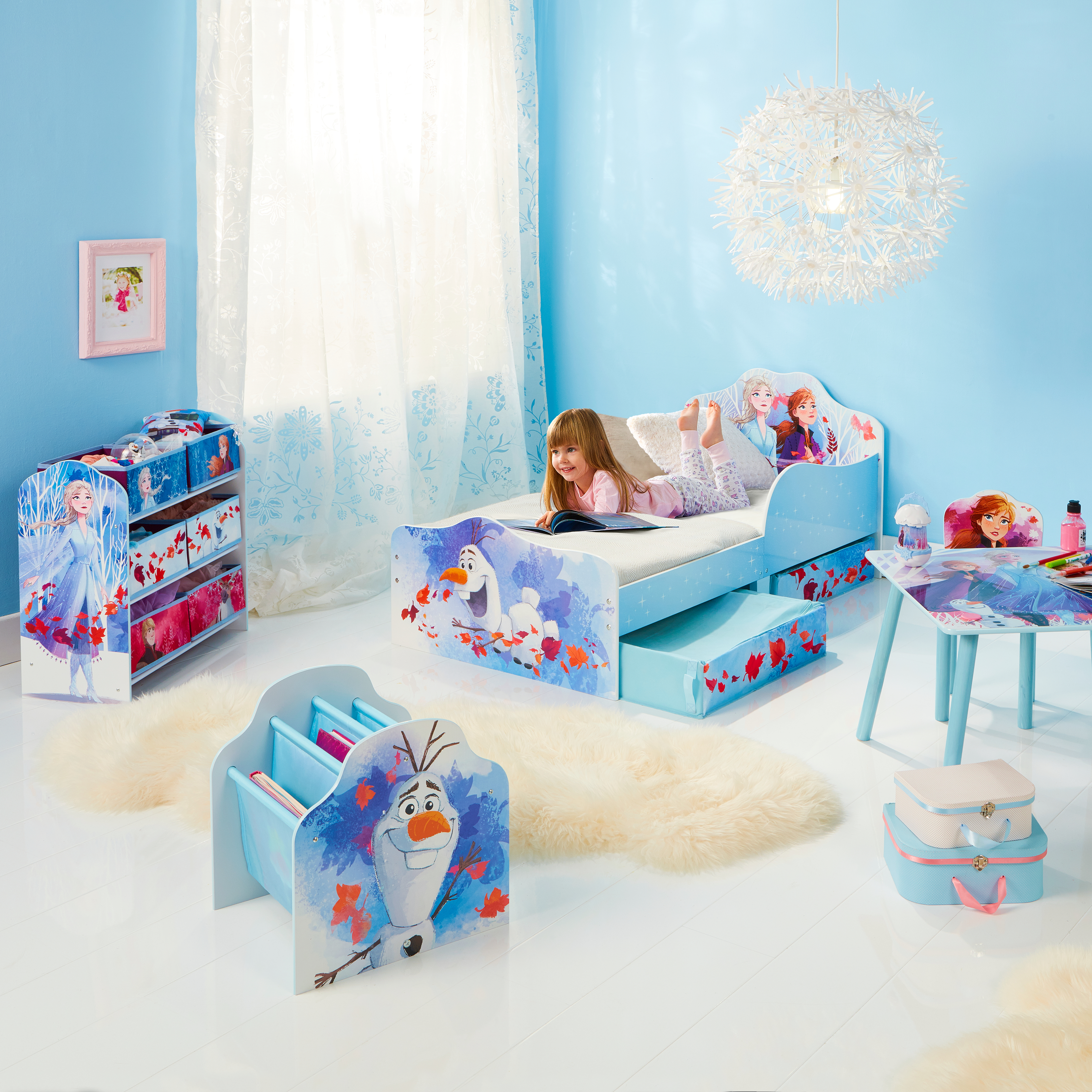 Frozen fever took the world by storm six years ago, and we at Happy Beds have it too! We’ve launched some amazing new Frozen products on our website! From Frozen Beds to Frozen Nightlights, we have everything you could ever need! Maybe Frozen isn’t for you and your child, don’t worry - check out our brand new character room products for lots of other exciting kid’s bedroom options!

Which Animals are Getting the Best Night's Kip?

The Rise of Fly-Tipping During the COVID-19 Pandemic
Categories
Shopping on HappyBeds.co.uk is safe and secure. All information is encrypted and transmitted without risk using our secure Stripe payment facility