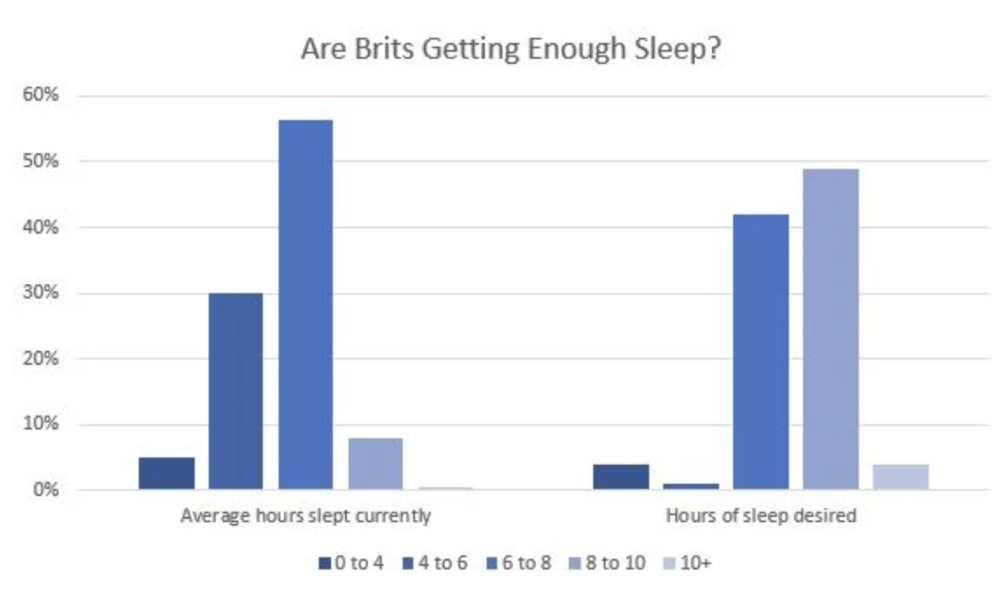 Whether it’s because you had a late night, had fragmented sleep, or simply aren’t keen on your plans for the day ahead, we’ve all been tempted to press the snooze button on occasion. Right? Well, we all know a ‘morning person’ who claims to practically spring out of bed each morn too… which got us thinking:

Is pressing the snooze button as common as our sleep-loving team think, or is it a rare occurrence?

To find out the answer, we set about some research. Some snooze button research, you could say! The findings of which, I’ve outlined below.

Brits Are a Bunch of Snoozers

In our survey of almost 3,000 people, it was revealed that almost three quarters (74%) of Brits use an alarm to help them get up in the morning and 57% of these people press the snooze button every day.

Most people hit it just once or twice (66%), a quarter press snooze three or four times each morning, whereas some respondents (9%) admitted to hitting the button five or more times in a row.

With an alarm clock not seeming to do the trick for many, we asked respondents for their best tips for getting up in the morning. Many people recommended hot caffeinated drinks like tea and coffee, whereas a large proportion of respondents said their kids or pet cats and dogs would wake them up if their alarm didn’t.

Why Are We Pressing That Button?

Well, we asked how many hours, on average, people slept each night and then compared this to the number of hours sleep they would like, and the answer was clear: we’re not getting as much sleep as we need.

Two thirds of people (66%) said they would like more sleep than they currently get!

Delving into this deeper, we found just under a third of people surveyed (30%) said they get between four and six hours of sleep per average night, and more than half (56.5%) said they get between six and eight hours of sleep per night. However, 42% would like between six and eight and a further 49% of people would like eight to ten. Therefore, it seems many people are longing for an extra hour or two in bed each morning.

At the two extremes of the scale, just 5% of people said they have less than 4 hours of sleep per night, and less than 1% claimed to have ten hours or more.

At the two extremes of the scale, just 5% of people said they have less than 4 hours of sleep per night, and less than 1% claimed to have ten hours or more.

As a Sleep Specialist, I’m aware that many people would like a better night’s rest and are prone to pressing snooze. However, it is interesting to see the data’s insights into how much sleep people dream of, compared to what they currently get, and how this likely influences their morning routine.

With two-thirds of people stating they’d like to get more sleep than they currently get, it makes me curious whether this is due to late bedtimes, or simply because the quality of their sleep is poor. Either way, our company ethos is ‘because everybody needs a good night’s sleep’ and, with help from the results of this study, we’re determined to help the sleep-poor feel more rested.

If you need help getting that extra time in bed, check out our guide ‘8 Top Tops for a Healthy Night’s Sleep’.

Is Snoozing Bad for Us?

Getting very little sleep is definitely worse for you than getting too much, however, delaying the inevitable can also play havoc with your body’s natural clock.

According to scientists, repeatedly pressing the snooze button will result in your body assuming the first chimes were a false alarm. Leaving it in a state of shock when it repeatedly goes off. The result? Sleep inertia – in other words, that groggy, tired feeling you get and can’t shake for a few hours after waking.

Read all about inertia, and get top tips on how to stop hitting snooze, in our blog post ‘Snooze, You Lose: Why You Shouldn’t Use the Snooze Button’.

Why is Waking Up So Hard?

There are numerous reasons why you may find it hard to wake up in the morning, including:

• You lack a consistent routine

• You didn’t sleep for long

If you're wondering how to stop snoozing, it could be worth looking at your sleeping habits. If you’re struggling to get a quality night’s sleep, it might be because your mattress simply isn’t the best it could be. Whether it’s old, damaged, or simply doesn’t provide you with the right level of comfort or support, your mattress can have a huge influence on how you sleep, and therefore how awake you are each morning when your alarm rings.

That’s where we can help. We uniquely design and make mattresses and mattress toppers. So, whether you’re after the supportive comfort of a memory foam mattress or a traditional pocket spring base, we’ve got you covered.

Take a look at our Mattress Buying Guide, for tips on everything from choosing the right size mattress to which type you may feel, is most comfortable, then shop for your perfect mattress.