Getting a good night's sleep really is essential when it comes to looking and feeling at your very best. The current NHS guidelines recommend that all adults need between six and eight hours of sleep each night to function at their best, and that sleep needs to be quality and undisturbed. But what happens if we don't achieve that level and quality of sleep?

We've worked alongside our resident sleep psychologist, Katherine Hall of Somnus Therapy, and research from the NHS to visualise the effects of a lack of sleep over time on our very own digitally rendered Sleep Deprived Sally and her equally tired friend, Sleep Deprived Sam.

Let's start from the place we'd all love to be - perfectly well slept! As we can see from our images, Sally and Sam both look happy and healthy with the recommended sleep every night. Their skin is full of colour and their eyes look bright, with no bags or wrinkles. The expression on their faces suggest that they're happy, something that makes a big difference to her outward appearance.

These images of Sally and Sam will provide our baseline for measuring the effects of sleep deprivation and poor sleep. 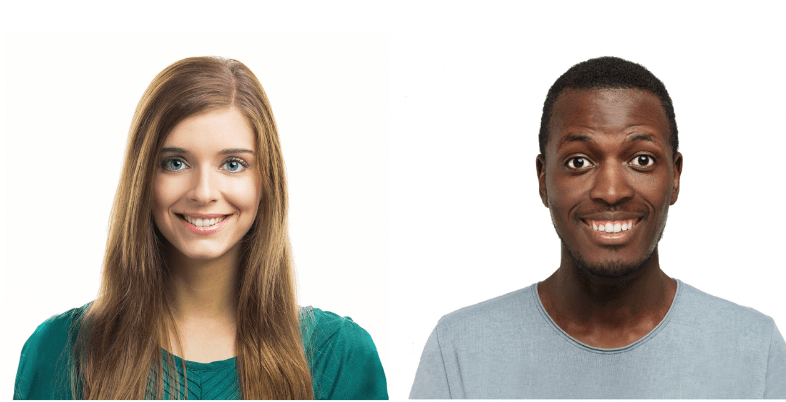 The Effects of Poor Sleep

Good quality sleep isn't just dependent on getting those recommended six to eight hours. In order to get the most from sleep, you need to make sure that your sleep is good quality. That means it should be undisturbed and comfortable, allowing your body to fully rest and recover during Rapid Eye Movement (REM) sleep. REM sleep is when the brain becomes more active and the body is at its most relaxed, helping that rest and recovery occur, it's characterised by the eyes moving rapidly in the head.

If you're not getting the required time and quality of sleep, that's when you'll feel the physical effects starting to take hold.

One of the most noticeable physical effects of poor sleep is apparent in the skin. Over time, without proper sleep, skin can become paler and sallower, lacking in the usual healthy colour you'd expect. Further, the skin will begin to sag and possibly even wrinkle, especially around the eyes. A couple of nights without great sleep shouldn't lead to this; however, these effects will start to become more obvious over an extended period.

We're probably all familiar with the feeling of looking in the mirror after a poor night's sleep and seeing the tell-tale signs in our eyes. Well, the same is true for our sleep-deprived duo, who begin to suffer from red and puffy eyes relatively soon after their period of poor sleep starts. Further, dark circles appear around their eyes, and lines start to build over time. Combined with their pale and sallow skin, the effects of poor sleep do take hold of Sally and Sam's facial expressions as time progresses.

It's not just the eyes and skin that are affected by a lack of sleep; physical appearance is also hugely altered by mood. We're all familiar with that feeling when the alarm goes off, and we've had a bad night's sleep - we're moody and miserable, feeling down and even anxious. These are all common effects, sometimes even leading to mental health problems. As Sally and Sam go longer and longer without sleep, their expression mirrors their mood. They begin to look much sadder and more anxious, which has a significant effect on their overall demeanour.

Another effect that can take hold over some time is weight gain. While we may not associate sleeping poorly as one of the ways to gain weight, it's quite common. The NHS advises that “studies have shown that people who sleep less than seven hours a day tend to gain more weight and have a higher risk of becoming obese than those who get seven hours or more.” As we can see, Sally and Sam are getting less than six hours each night and begin to gain weight the longer this goes on.

Our body needs to be well-rested to fight off infection. Unfortunately, both Sally and Sam succumb to a common cold thanks to the fact that they've simply not had enough sleep. Prolonged lack of sleep can negatively affect the immune system, enabling these sorts of illnesses to creep in.

These are just the physical effects of sleep deprivation on the human body, but there can be so many more mental and physical issues in the long term.

How No Sleep Affects Us Mentally Over Time

Using Sleep Deprived Sally and Sam as an example, we've been able to show the physical effects of sleep over a nondescript time period. We also spoke to our regular sleep psychologist, Katherine Hall, who gave us even more information on how the human body would be affected by absolutely no sleep over a period of time.

24 Hours of No Sleep

No major health complications but some visible signs of sleep deprivation including dark circles under the eyes, puffy eyes, and tremors. Some people experience increased food cravings, anger, and irritability. Drowsiness, fatigue, decreased alertness, and increased risk of making mistakes is also common.

3 Days of No Sleep

After 3 days of no sleep, the previous symptoms will intensify with an increased urge to sleep. Some people experience brief periods of sleep known as microsleeps which only last 30 seconds and occur without you realising it. Cognitive performance is drastically impaired as certain parts of the brain struggle to communicate with each other.

4 Days of No Sleep

Four days without sleep is known as extreme sleep deprivation. Staying awake becomes increasingly harder. Hallucinations are not uncommon and may include seeing, hearing, or feeling things that aren't really there. You may also notice increased irritability, fatigue, stress, anxiety, and depersonalisation, or the feeling that you're observing yourself from outside your own body or that your surroundings aren't real.

5 Days of No Sleep

The urge to sleep and the frequency of microsleeps will increase and intensify. Hallucinations may now include delusions, illusions, and disordered thinking. All of the physical symptoms mentioned previously remain and may worsen.

6 Days of No Sleep

At this stage, your urge to sleep will feel unbearable and your perception of reality will be severely impaired and distorted. You may not be able to accurately perceive and process information, resulting in a state of psychosis.

Making Sure You Don't Become a Sleep Deprived Sally or Sam

Hopefully Sleep Deprived Sally and Sam have helped show you the importance of getting a good night's sleep. From ensuring you're setting yourself a good sleep routine to having a comfortable bed to sleep in, taking care of your sleep means taking care of yourself!

The Surprising Benefits Of Sleeping With Your Pet

Ways To Add Storage To Your Child's Bedroom