The History of Beds Part 2: The Growing Gap Between the Rich and Poor in the Middle Ages

Content Marketing Specialist at Happy Beds, an avid reader of eclectic books, ambitious chef of French cuisine, adept at crafting tantalising cocktails, and more often than not, curled up in bed. 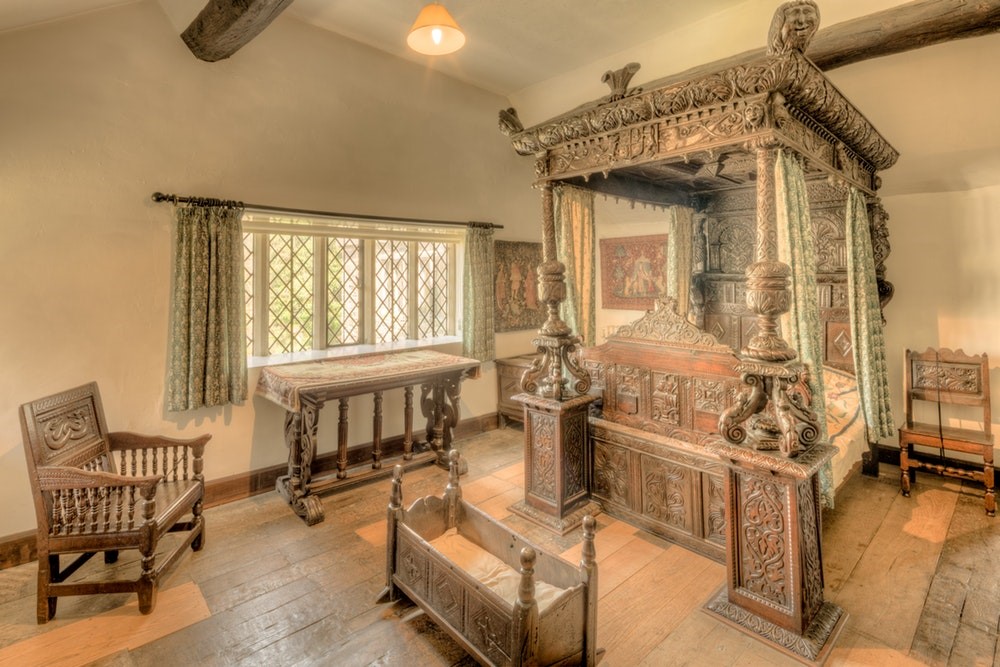 I am glad that you have decided to join me, whilst we take a look at the history of beds through the ages! Last time, in this humble little series, we took a look at the days of Ancient Egypt, when civilisation had long since evolved from sleeping on animal furs in caves and begun treating themselves to a more comfortable night’s sleep. However, as is often the case with a growing culture, there quickly came a growing divide between those in power and those in poverty.

As far as history is concerned, there weren’t too many drastic changes for over three millennia, as it was around 200 BC that, during the era of Ancient Rome, people began to create the first mattresses. These ranged in fillings and quality, with the poor using reeds, wool or hay and the wealthy using feathers, and this was to be the true turning point in how starkly the rich and the poor slept.

This tour of history is moving along at a rather modest pace, yet suddenly we must catapult throughout time to around the time of the 15th century; an era collectively known as The Middle Ages.

The Renaissance of Sleeping

For the longest time, this focus on stuffing mattresses was the one way sleeping conditions improved, yet it continued to branch off in different means for the different echelons of society.

These mattresses varied in all manners of fillings, ranging from straw to feathers, as well as being covered in velvets and silks. Obviously, it’s these latter elements that were reserved solely for those living lives flushed with luxury.

It was during this period in time, particularly around the 14th century, that many sleepers started to recognise the importance of sleeping above the ground. And thus, bed frames emerged in a few distinct and different ways.

No longer were these frames a bed in one form, as they were for the pharaohs of old, but as platforms that host the various mattresses only just becoming readily available.

No longer being content with the likes of basic frames, 1% of the Middle Ages commissioned more and more garish beds. The height of this flamboyant taste saw the creation of the four-poster bed; a bed frame with four posts at each corner of the frame and curtains spread between each of them.

Most were designed to be flashy and extravagant, decorated with regal colours and intricate patterns, but this may not strictly be due to the owner’s own tastes.

Various sources state that kings would often hold their courts within their bedrooms, often having special bedrooms and beds for these purposes. No king took this further than Louis XIV though, as it was rumoured that he owned over 400 beds; at once.

Could you even imagine owning that many beds, let alone for yourself? I’d call more than two beds per person utterly ridiculous, but I guess that’s why I’m not known as the Sun King, or a monarch of the House of Bourbon. Just as well, I’m more of a rum drinker anyway.

Anyway, throughout the Middle Ages, especially towards the end of it and in the days of the Tudor period, it became popular for women to treat the bedroom like a lounge.

This use of the bedroom was found in the middle and high-class homes, but what about the lower and working classes? Well, they didn’t have it quite as pampered. Servants and workers were more or less expected to sleep where they worked; often literally.

For example, those who laundered clothes would fall onto the pile of clothes yet to be cleaned, and chefs would be found curled up beside their ovens, gaining comfort from the remnants of their heat.

Somehow being even more ‘on the nose’ than a cook sleeping by an oven were the personal servants of the wealthy, who would occasionally be allowed the honour of sleeping directly under their master’s beds. Oddly enough, despite my tone hinting at sarcasm the servants did, in fact, see this as an ‘honour’.

Those were merely a handful of examples from those working in a manor or a large home, but it was the poorer families that truly showcased the great divide between low-income houses and those lounging around in four-poster beds atop velvet adorned feather mattresses.

No such luxuries were found in these less fortunate homes. They were lucky to have basic wooden bed frames and straw-filled mattresses; and even privacy was yet another luxury they couldn’t afford.

Families would cuddle up and share their body heat as a way to combat the unforgiving weather. This set up was born of both necessity and lack of alternatives, as homes of the poor were significantly smaller than those of the rich.

Really, the same could be said of the wealth gap today, perhaps even more extreme than the gap of the Middle Ages, yet the lower standards of today usually still allow separate sleepers to have their own rooms; even if it is one room for the parents and one room for the children.

I guess the old saying is true, ‘the more things change, the more they stay the same’, yet it was this period of history where these massive differences between the quality of life were becoming more and more evident.

In this next part of this series we’ll take a look at more modern times, and how a higher standard can be found for almost everyone, as well as how the bed has truly evolved in the last few decades. However, in the meantime, if you’d like to live like gentry, why not take a look at our luxurious yet affordable beds?

Know of any other interesting times throughout history where sleeping’s taken some odd twists and turns? We’d love to hear about it! Feel free to tweet us, find us on Facebook and tag us on Instagram with your thoughts!

Tailor your Experience Now
Build Your Own Bed