No one enjoys a nightmare, but occasionally you'll have one so bizarre that you wake up not only anxious but extremely confused. Nightmares are most often a symptom of everyday stresses. They're nothing to worry about, simply a way of your brain processing events from your waking life while you're in bed.

However, when we were thinking about nightmares, we started wondering how they might change worldwide. Do we all have regular nightmares in common, or are there notable differences depending on where you are in the world? What are some of the most unusual nightmares experienced in different countries?

We decided to research this, and here's what we found… 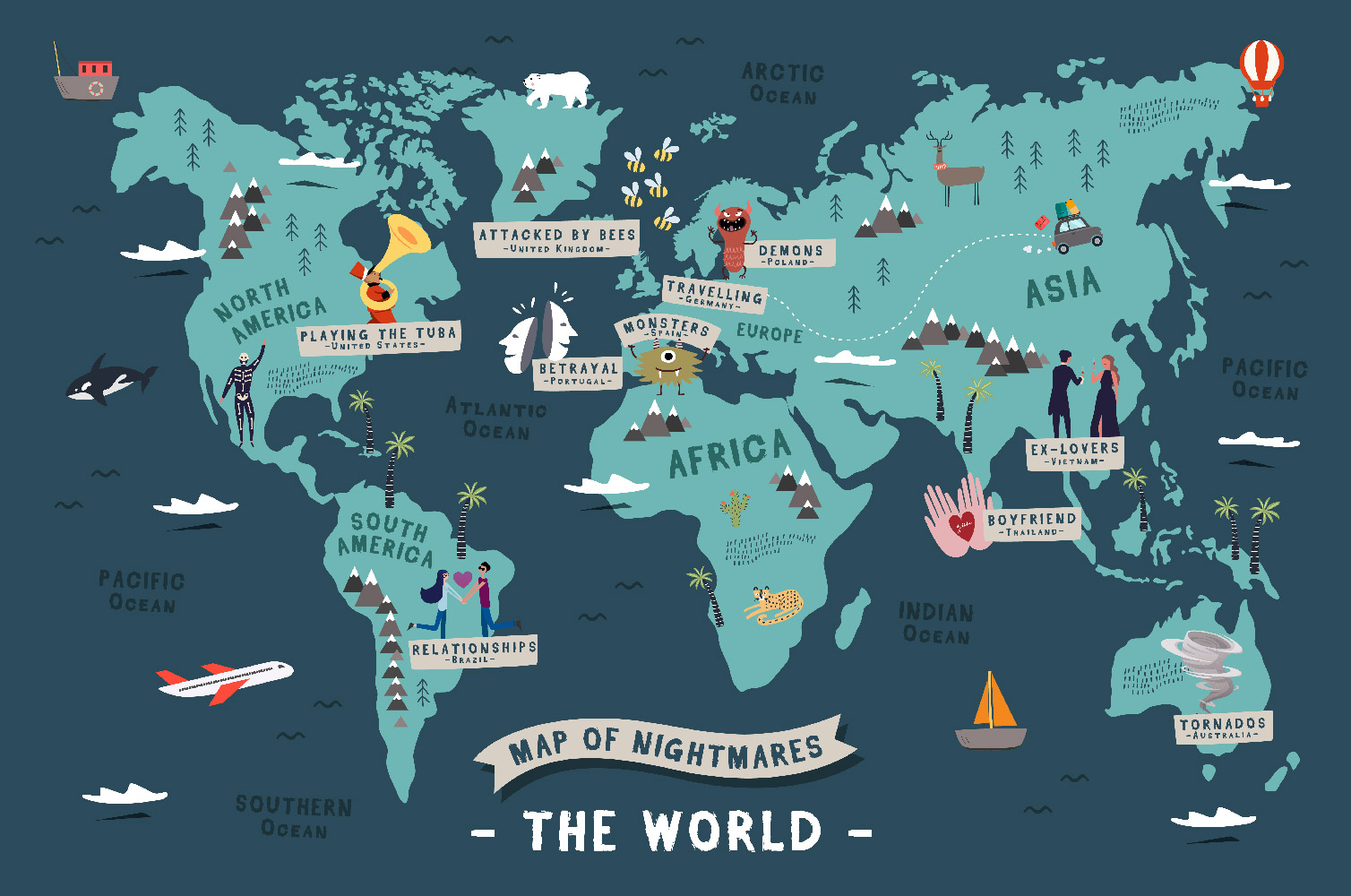 Common nightmares around the world

We're all human, and it appears that we have a lot in common when it comes to nightmares. There were some regular threads running through all the countries we looked into regarding creepy dreams: teeth falling out or crumbling appeared in almost every list. At the same time, zombies and being chased are also common nightmares across different cultures.

As with most nightmares, these point to anxieties throughout the day. Teeth dreams can point towards self-doubt while dreaming of being chased could mean you're trying to avoid something in your waking life. Check out our Common Nightmares and Their Meanings blog for more information on common nightmare meanings.

Unusual nightmares in the UK

There are some notable nightmares experienced in the UK. Witches were a standout nightmare that didn't appear in other locations, while a nighttime fear of bees is also unique to those in the UK. While dreaming about bees is thought to be a good omen, a bee appearing in a nightmare can symbolise social anxieties or a feeling of not fitting in.

Unusual nightmares in the USA

People in the US have several unique and pretty unusual dreams! The wildlife can easily explain some unique nightmares in the US; for example, bears appear on the list. However, some are a little more difficult to explain. Eating a shoe appeared as a regular nightmare in the US, alongside playing the tuba, and toes falling off. Queues are also a nighttime stress across the pond, which can point to feelings of impatience or feeling like you need to put yourself first.

Australia is another country where some nightmares can be explained due to the ecosystem, with spiders and snakes appearing multiple times on the list. Tornados are also a common nightmare for Australians, symbolising feeling stressed and overwhelmed.

We saw several relationship-based dreams appearing in Germany, with people suffering from nightmares about their current partners and exes. One unique nightmare that appears on the list for Germany is travelling, or more specifically, driving. Scary dreams about driving represent our journey in life - if you're suffering from nightmares about being behind the wheel, you could be worried about your sense of control or the direction you're heading.

One standout nightmare for people in France is FaceTime. While phone nightmares are relatively common, FaceTime is a little more unusual. The same meanings apply, though - these kinds of dreams symbolise anxieties about connecting with others or that you're losing touch with important people in your life.

We discovered many supernatural nightmares occurring in Spain, with monsters being a standout. Monsters are a common theme throughout childhood when imaginations develop but are a little more unusual in adults. Fears of monsters in adulthood are usually less literal, coming from superstition, religion, urban legends, or even a scary horror film. These nightmares may occur simply because you've seen some creepy imagery throughout the day, or they could signify larger religious or cultural fears.

Over in Italy, we found many nightmares featuring relationships - particularly about pregnancy and marriage. If you're not at that point in your life, these dreams can feel unsettling, but they usually just symbolise that your life is moving into a new stage. One nightmare unique to Italy was food - definitely unusual considering the country's culinary delights! Nightmares about food can have various meanings depending on what the food is and the scenario, but they're usually connected to anxieties about your lifestyle or personal relationships.

Poland is another country where supernatural and religious imagery appears regularly in nightmares, with ghosts and demons appearing on the list. Demons commonly represent evil, so they are not the most fun thing to appear when you're sleeping. However, they usually mean a waking inner turmoil or conflict you must consider and resolve.

Nightmares about ex-lovers were a common theme across Vietnam. Having a nightmare about an ex can be jarring, especially if it's someone you haven't seen or even thought about in a while. You can breathe a sigh of relief, though, as these nightmares usually don't have anything to do with the person you're dreaming about and instead represent you and your feelings. Nightmares about exes tend to express unresolved issues or emotions from the relationship or feelings from that stage of your life that you need closure.

We found many family-based nightmares occurring across Thailand, with children, mums and dads appearing on the list. The most common nightmare, though, was boyfriends. If you're dreaming of cheating, fighting, or breaking up, that doesn't mean your partner is guilty. Instead, these nightmares indicate personal insecurities that you may need to work through.

Similarly, in Brazil, one of the most notable nightmares experienced was related to personal relationships. Without specifics, it's difficult to pinpoint exact meanings, but negative dreams about relationships generally don't mean you have anything to worry about - you may just have some underlying insecurities.

One of the most common unusual nightmares in Portugal was betrayal. Dreaming about being betrayed can make you anxious, but it doesn't mean you shouldn't trust people or situations in your waking life. Like all nightmares, dreaming of being betrayed points to a general fear of betrayal and doesn't make it more likely to happen.

Unusual nightmares in the Netherlands

Finally, we looked at nightmares across the Netherlands. Alongside some of the more common nightmares, such as spiders, ghosts and teeth, we found people in the Netherlands share a bedtime fear of work. Nightmares about work often mean something in your work day is causing stress - it could be a big project or a tight deadline. Often, though, dreams are just your brain processing your day. If you've spent a lot of the day at work, it makes sense for it to crop up in your dreams (or nightmares!) occasionally. 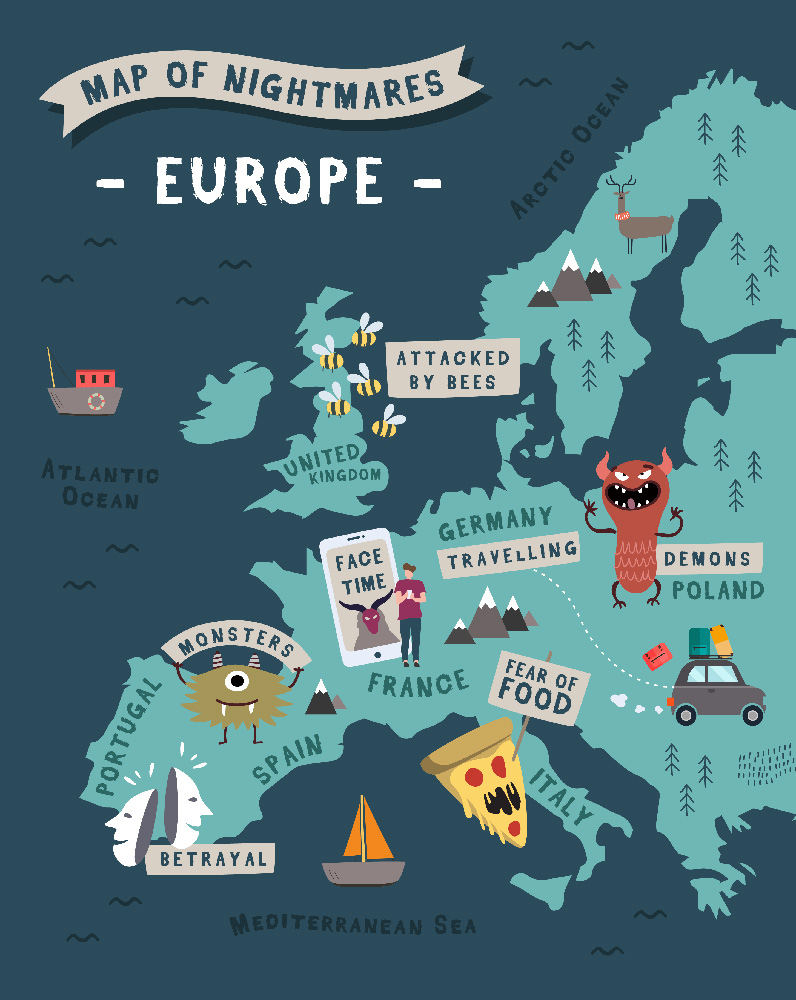 Dreams can be confusing - nightmares, even more so! Generally speaking, the leading cause of nightmares is simply your brain relaxing and processing thoughts and feelings that you've had during the day. They can even help you regulate your emotions and process insecurities from your waking life! So, unless your nightmares are incredibly regular, traumatic, or affecting your health, more often than not, they're absolutely nothing to worry about. If you’re suffering from recurring bad dreams, check out our Psychologist Advice for Dealing With Nightmares post.

Still not getting the good night’s sleep you deserve? It could be down to your bed or mattress, so you might want to invest in a new bed such as a wooden bed or a storage bed frame. For extra help making a decision, check out our Bed Buying Guide and Mattress Buying Guides which tell you everything you need to know!

4 Ways To Style Your Bedroom With A TV Bed